A1. Alpe Djouan
A2. Rough Grazing
A3. La Descente

B1. Eaux Rousses
B2. Camping Europa

Celebrating 27 years as a recording artist, Massif Trophies is Nilsen’s first solo release for Editions Mego. In 2015, he set off on a month-long hiking trip in Gran Paradiso, a national park in the Graian Alps in Italy, to explore the acoustic environments of the alpine landscape. The main inspiration for the album derived from the monotony and physical effort that mountains and high altitudes demand. The compositions reflect upon the perception of a landscape with wildlife, rapid weather changes, horizontal thunderstorms and rock avalanches. Concentrating on the details of the path, zooming in on the micro-cosmos of the vegetation and soil, while resonating the massive alpine terrain and echoing the myths of mountains as accursed or sacred sites. The five pieces contain narratives based on field recordings, experiences and reflections from the journey that rose to over 3000 metres above sea level.

While Michael Begg places his field recordings in a musical setting that alters its origins, BJ Nilsen often presents the sounds of nature as it – and in unmatched sound quality.
I assume there will still be a lot of editing and sound manipulation necessary to get to a sonic result like this, but still it feels as though you are actually standing at the original recording location.
Before listening to Massif Trophies, you might keep some extra clothes at hand – a hiking trip in the Gran Paradiso alpine mountains does not guarantee good weather.

It’s not ‘just’ the Sound of Nature, however – above all Massif Trophies is a, experimental, ‘musical’ album. Details like background drones and manipulations of the environmental recordings are added to tell the story of the tough trip through the mountains.
The album starts with the natural sounds of thunder (Alpe Djouan, Rough Grazing), but also presents a drone piece where the environmental sounds are moved to the background (Eaux Rousses).

“Drawn to the monotonous and physical effort that mountains and high altitudes contributes, this [hiking trip] became one of the main inspirations for the album, reflecting upon the perception of the landscape during several hours of physical difficulty, let alone rapid weather changes, horizontal thunderstorms and rock avalanches.”

Especially recommended for all of us that like adventurous armchair travelling!

Jumping to Editions Mego after a remarkable run of releases for Touch, BJ Nilsen (the initials stand for Benny Jonas) has collaborated with some of the best in the field recording business, including Chris Watson. His focus lately has been largely urban, most strikingly demonstrated by 2013’s Eye of the Microphone on which he brought the ghosts of London’s ancient past up through cracks in the pavement to haunt the modern day. Prior to that, 2010’s The Invisible City used sources as obscure as “dead trees leaning against each other” and “cat climbing up door” to invoke with Pendereckian intensity the teeming grids and networks that keep our megalopolises running.

So when I first read the title and saw the cover art of for his new record, I admit my heart sank a little. “Massif,” a word used in mountaineering and geological circles to describe densely clumped collections of peaks and the flexures of the crust that formed them, and the image of a desolate cliff face combined to remind me of so many cold, Köner-indebted drone records I’ve received over the years from labels like Glacial Movements — very few of which get anywhere near the German artist’s mercurial Nunatak Gongamur/Teimo/Permafrost triptych. Nilsen, I thought to myself, bridged that yawning crevasse long ago. What new trophies, exactly, can he have brought back from this particular massif?

Extreme weather and frigid locations have long fascinated Nilsen, dating back to the days he operated as Hazard, but not since 2007 has he ventured into the cold, when The Short Night, for all its creaking ropes, sudden storms of static and shipping forecasts, fell tantalizingly short of the Pole. Unfortunately, like so many others working in that realm, it seems likely he will remain the Cook to Köner’s Peary, the Scott to his Amundsen.

Happily I have been schooled (again) not to judge a record by its cover or even its title. Although the sound sources forming the basis of Massif Trophies were indeed collected during time Nilsen spent in Italy’s remote and mountainous Gran Paradiso National Park, his focus here is not so much the power of nature as it is the position of humanity within it. For example, although “Alpe Djouan” opens the record with thunder the tempest is observed at a distance; the sound the rain makes close to the mic suggests shelter has been sought, not adventure, and farmers can be heard hurrying their livestock indoors for protection. Where others may have been tempted to reel the storm in and unleash it around the listener, Nilsen’s decision to view this one from afar pays dividends — the image the track evokes of lightning among the peaks as the farmers soak and swear beneath is sublime in the Romantic sense, all deep shade and shocking illumination.

The short, intense “La Descente” focuses in on the artist himself, presumably stumbling his way down a mountain and sounding a little worse for wear. The hiker’s exhaustion is augmented by subtle glitches in the recording which reflect the effects of altitude, again diverting attention away from the landscape and presenting its affects on those laboring within it. Some way behind Nilsen, you can hear the soft rumble of a mounting storm — perhaps even the threat of avalanche. The track may or may not reference Charpentier’s La descente d’Orphée aux enfers, especially taking into consideration its pastoral forerunner “Rough Grazing” and the fact “Eaux Rousses,” which comes next, takes its name from the hellish-looking waterfalls of Valsavarenche. “Eaux Rousses” is far and away the most immersive track on Massif Trophies, notable for its gaping emptiness and the subtlety of its progression. One imagines gazing into a deep, dark shaft and fighting the temptation to follow the red waters and jump inside. Nilsen buries recordings of gaiety in the void, all fiddles and faint drums that act as devilish lures sent up on the stale air. The tension grows with a headache throb — barely palpable at first, almost unbearable as the track draws to a sudden and uncertain end.

But there is a sense of freedom to what follows that has not necessarily been present before, and the feeling that Nilsen survived “Eaux Rousses” and made it down the mountain unscathed is celebrated in the most overtly manipulated track on the album. “Camping Europa” opens like a new day, with the chime of church bells welcoming the grasshoppers into the sunshine giving the impression Nilsen has rediscovered humanity after days with his imagination in the wilderness. Almost 10 minutes of tape-mashing follows, burying recognizable sound sources completely and waging what I translate as being some kind of sonic revenge on the recordings of nature that made it back to terra firma with the artist. Having returned from a significant amount of time wandering some of the most beautiful landscape on Earth with the realization that nature writes the rules when out in the field, Nilsen seems anxious to correct the balance. Back at base, with a roof (or canvas, at least) over his head, the boot is very much on the other foot: nature, on tape, can be pulverized to the artist’s wont.

After seconds of silence, a deep rumble of thunder ends the album just as it began. A threat or a summons? Maybe both: Nilsen knows who’s really in charge, and without it his role as the creator of Massif Trophies would not have been possible.

BJ Nilsen is in great shape.  How do we know?  Look at these mountains.  By the end of his month-long Alpine hike, the artist learned a few lessons about difficulty, determination and perseverance, which are translated to this recording.  We hear heavy breath, cow herders and footfalls in snow, all part of the cold score.  The album even begins with a thunderstorm, no stranger to Nilsen’s oeuvre: a lengthy foreshadowing that prompts protest from the bovine populace.

Nilsen sees the mountain in metaphorical terms as well as physical: the hike a honing journey that reveals the innermost self.  In selecting recordings for this album, Nilsen attempts to be both representative and allusive, underlining beauty and danger in near-equal measure.  For every gorgeous, earth-bound passage (such as the cacophony of cow bells in “Rough Grazing”), there’s an opposing threat (the slow-growing drone and rumble of “Eaux Rousses”, suggesting an avalanche).  But the sonic landscape is much richer than the cover image would indicate, as if the artist took time to look into the nooks and crannies, embraced the sound of every tiny flock, and made his peace with the mercurial skies.  Not that Massif Trophies makes us want to visit the Alps; quite the opposite.  But by reflecting the ardors of the journey, the artist wins our admiration.  He’s out to capture the essence of the region, and to be honed by rock and time.

By “Camping Europa”, the early threats have dissipated.  Thunderstorms are replaced by the sound of running water, cow bells by church bells, nature by civilization.  The opening minutes are the harshest of the album.  It’s as if the return home is not what Nilsen has expected; he already longs for the simple difficulties of the mountain trail.  The long ensuing drone, in contrast to that of “Eaux Rousses”, seems more technological than archeological.  The formerly cherished items ~ cell phone, laptop, television, automobile ~ now seem suspicious.  This moment will pass, but it lasts long enough for us to share in the discomfort.  Perhaps without knowing it, we are walking into the Alps every day. 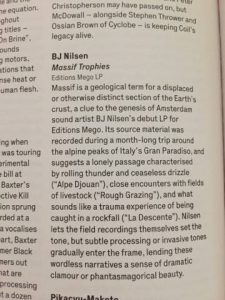