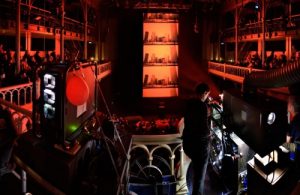 During the winter of 2015 Karl Lemieux travelled to China with BJ Nilsen and a small camera crew to make a piece about the country’s infamous ghost cities. The work presented is made with images shot in the city of Yujiapu, near Tianjin where ancestral fishing villages have been destroyed to make way for a multibillion-dollar real estate project that was to become the new financial district of the area. The entire city was developed in the style of New York’s Manhattan district but never finished and has been left uninhabited for over six years. The film uses the lines and frames of the buildings of Yujiapu and the lines and the frames of the film strip to create abstract elements that slowly reveal an incredible desolate urban landscape. Yujiapu premiered for Vertical Cinema at Sonic Acts Festival 2017 / Photo by Pieter Kers. Live clip here and here